Here’s a re-run from a few years ago. Because I can’t think of a better story to tell on Mother’s Day.

I’m thinking of my mom on this Mother’s Day, as we all are. She’s been gone more than ten years now, but it seems like only yesterday I was making those semi-weekly trips to Hettinger to see her in the nursing home, each time stopping at the Albertson’s store in Dickinson to buy her a couple of bags of Snaps, her favorite snack (and mine—I usually bought three bags and gave her two).

About a year before she died, I wrote a little story about her and her favorite doctor, Dr. Joe Mattson, which the Bismarck Tribune published. I have shared it here before, but I think I’ll do that again this Mother’s Day.

My 83-year-old mother is a resident of Western Horizons Care Center in Hettinger, North Dakota, population 1,307, 14 of them doctors serving a regional medical facility that cares for residents of a 5,000 square mile expanse of prairie at the intersection of North Dakota, South Dakota and Montana, where the population averages just over one person per square mile. 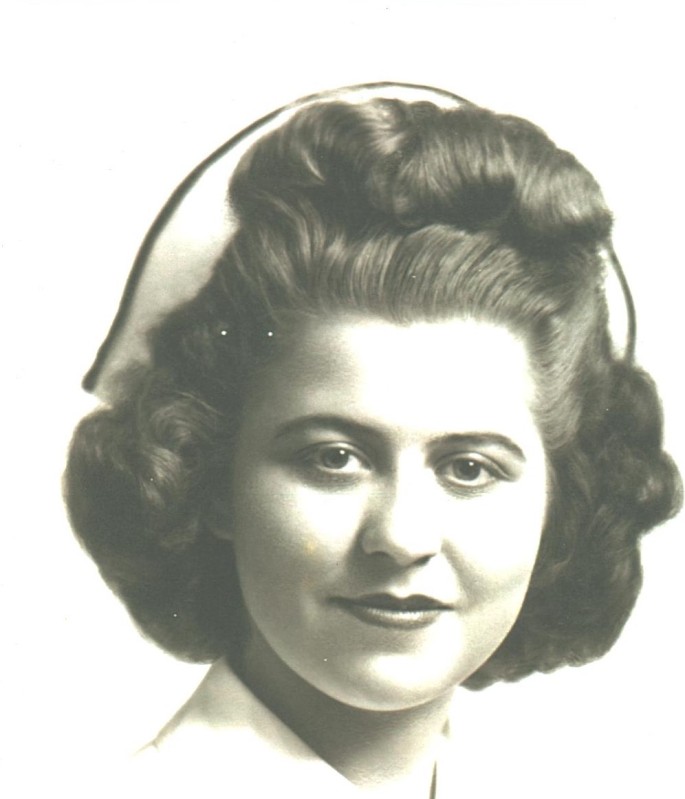 My mom in 1946–her nursing school graduation photo. I wish nurses still wore those hats and uniforms. There was something reassuring in that look when they walked into a hospital room.

In her younger days, my mother worked as director of nursing at Western Horizons (then known as Hillcrest, for its location–only coincidentally, I think, on a hill across the highway from the Hettinger cemetery, where many of the residents can look down on the resting place of spouses and other loved ones) while she and my dad struggled to put seven kids through college. Today, she lives there and has most everything she needs, including her large circle of friends and, most importantly, for someone who suffers the normal aches and pains and medical crises of an 83-year-old, her old friend and longtime doctor, Joe Mattson.I visited with Joe a while back at Hettinger’s hospital, where he had put my mom for a few days because an infection had sent her temperature soaring and he needed to get it under control. Joe’s a generous, kind-hearted country doctor who forsook big city riches in the 1960’s for a chance for he and his wife Pat to raise their children – seven in all, three of their own and four adopted – on the prairie. He and a couple other visionary doctors built this great medical center to bring health care to this sparsely populated area – a clinic, a hospital, a nursing home and an assisted living facility – and provide more than 200 jobs, perhaps a fourth of all the jobs in Hettinger today.

I confess I don’t know him well. He came to Hettinger after I left for college, and our acquaintance is a result of being unable to avoid bumping into each other in a small town on my visits home. I enjoy him immensely, a big bear of a man with a booming voice and unruly hair, and whose slightly rumpled and gruff appearance belies a bedside manner of Mother Theresa.

He visited my mother’s room late on a Friday afternoon, at the end of a long day in an even longer week, appearing untired at a time when most men well into their 60’s would just be looking for a recliner and a little supper. He looked at the charts, puzzled over the temperature and infection, and then plopped down in a chair and struck up a conversation, of grandkids and bad backs and summer vacations and the kind of thing old friends talk about.

More than 15 minutes he sat there, reassuring me, and through me, my mom, that nothing abnormal is going on here in a body that’s just getting a little older and a little harder to manage some days. We’ll just send in some more antibiotics and get this thing fixed.

He talked of his two pre-school grandkids who were staying with him and Pat while a daughter completed a move without them in her hair. He talked about his weekend schedule. He’s a Deacon in the Catholic Church in Hettinger, and this coming weekend the priest at Reeder, 13 miles down the road, is on vacation, so Joe was going to run over there and give communion on Sunday. And then he left–a 20 minute hospital room call, and I suspect he had more before he went home to Pat and those grandkids.

Later, approaching dark, the nurse came back in and said Dr. Mattson had just called and thought maybe my mom should take one of these pills before she went to sleep. He’d been thinking about her, even at home hours later, and wanted her to be more comfortable through the night.

Mom slept well indeed, and Saturday morning felt good, so I went home, promising to call. We talked a couple of times Saturday, and again Sunday afternoon when she told me she probably would go home Monday.

“Has Doctor Mattson been in today?” I asked.

“Oh, yes, and he says my temperature is down and my blood test looks good, and I can go home tomorrow. And guess what? He had just come from Reeder when he stopped to check on me, and he said ‘Phyllis, I bet you didn’t get communion this week, did you?’ ”

“And he reached into his pocket and pulled out his little gold box, and we said a prayer, and he gave me communion.”

And we wonder why we live in North Dakota?

My mom died early in the morning on a late September day in 2009, of old age. That’s what she wanted her death certificate to say, and that’s what it says. She had been hospitalized a few days with kidney failure, and when I arrived to see her at the hospital on a warm September day, her nurse had just issued a code, and everyone on the floor was scrambling to save her. Her blood pressure had dropped precipitously low, but she wasn’t quite ready to die, apparently, because she just slipped off to into unconsciousness, but lay there breathing on her own.

The hospital had her instructions not to resuscitate her. She had said for weeks she was tired, and ready to go see dad. The doctor on the floor came and told me I better call my brothers and sisters, because the end was near. She was going to get her wish. I did that, and in the next few hours, they began arriving. My youngest brother, Blake, was en route from Sioux Falls, and arrived about 9 p.m. Six of the seven of us were gathered around her bed—my brother Blair lives in Washington state and was unable to get there—when, about 10 p.m., she opened her eyes and looked at each one of us. She asked what time it was, and we told her about 10 p.m.

We’d been through this once before, earlier in the year, and that time when she awoke to see six of us around her bed, she said, with the hint of a smile, “Well, I must not be dying, because Blair isn’t here. If I was dying, he’d be here too.”

This time, she didn’t say that because, we’re all pretty sure, she knew better. Instead, she said “I’ve been having an argument with God, and I won.” And she proceeded to tell each of us good-bye. And then she drifted back off to sleep.

About 3 a. m. her breathing became very shallow and irregular. The nurse told us it was time. She said she was going to call the priest. Well, who do you suppose showed up about half an hour later? Not the priest, but Deacon/Doctor Joe Mattson. Shortly before 4 a.m. He did a quick examination, and then said “Let’s pray,” and he led us in The Lord’s Prayer, said a short prayer over her, hugged each of us, and left. And shortly after that, she died. She won the argument with God.

It was so fitting, and so natural, that Joe Mattson, this elderly, mostly retired doctor, would climb from his bed in the middle of the night to be at her side—and our side—in her last hours. As I said, there’s a reason we live in North Dakota.

4 thoughts on “Body and Soul: A Mother’s Day Story”